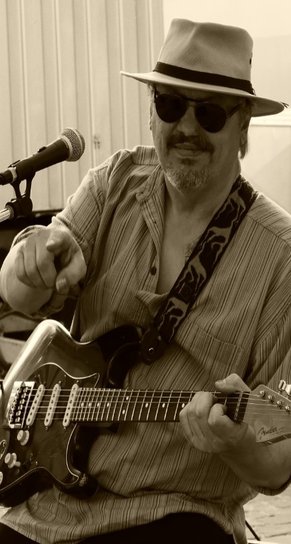 Marc Librecht begins playing music at the college in 1970, with courses in music theory and flute. As a classical music lover, he pushes his parents to buy an old upright piano on which he deciphers Beethoven sheet music, Bach or Chopin, his favorite pianist.

At that time he bears little relevance to other music such as rock and pop and swears only by classical music.

However, one day in 1973 during a visit to his cousin, fan of the Rolling Stones and blues in general, he listens to the blues song named  'Red House' from Jimi Hendrix: It is the revelation! The guitar becomes a priority, and at Christmas Marc’s grandmother  offers him a little folk guitar on which Marc makes his first experiences.

But electric  songs are hardly playable on an acoustic guitar.

Soon the old piano is sold to buy an electric guitar at the ‘Grand Bazar’ on the corner, an ugly  ‘CBS’ model with a terrible sound connected to an old ‘hand made’ amp with no brand, but nevertheless Marc  evolves and when the opportunity comes to play in a dance band, 'the Rockets' he borrows

the money from his parents to buy his first Fender Stratocaster, the beginning of a long love story.

He also starts playing with other musicians and forms transient groups as 'NADA' with which he makes his debut in public.

In 1975, Marc founds the group ‘MARBLE ARCH’, a rock band that tours widely in Belgium and in France for 11 years, including ensuring the support act of professional groups like SCORPIONS

Two 45T are recorded by the group during this period, including "I need a woman" in 1983.

(inspired among others by the music of Al Di Meola, John McLaughlin, Paco De Lucia, etc ..)

In this period Marc begins to enjoy more and more the acoustic guitar.

The duo plays essentially in bars and café-concerts, but performs also a support act for french

Marc decides in late 1987 to re-create a new band to play the music he has always loved:

A bassist and a drummer are enlisted: ‘TEX’ is born!

With a  repertoire of covers and own numbers, TEX plays for the first time at the ‘Braderie’ of Lille in 1987. The group performs intensively in bars, youth centers and is building a LIVE reputation on both sides of the Franco-Belgian border.

In 1991  the group gets a recording contract with a new Belgian blues label: TIGHT & JUICY, distributed by CNR.

The first Compact "ONE MORE NIGHT" is released in December 1991: 15 songs written by Marc and produced by FRANK VAN RAMPELBERG.

The year 1992 confirms TEX as one of the leading BLUES-ROCK groups in Belgium, which is materialized by a bunch of important concerts and festivals such as Handzame and many support acts of BIG JOE LOUIS, BLUES AND TROUBLE, SCREAMING JAY HAWKINS, ELLIOT MURPHY, LUTHER ALLISON, NINE BELOW ZERO, PATRICK VERBEKE, The BLUBINOS, MAXWELL STREET, JIMMY DAVIS, EDDIE KIRKLAND, ANSON FUNDERBURGH, DAVE HOLE, GOLDEN EARRING , and even the legendary JOHNNY WINTER and JOHN MAYALL!

In late 1992, TEX goes back to the studio and releases the second CD named "HOT & BLUE" in April 1993. This new album contains 17 tracks including 16 numbers from Marc and one offered by

The year 1993 will also be successful: PEER festival (the biggest in Belgium for the Blues with a public of 10.000 people), alongside people like ALBERT COLLINS and JEFF HEALEY!

The third album recorded in July 1994 is released in December 1994 with fourteen blues-boogie and rock compositions of Marc. The album title "Boogieland" refers to numerous concerts performed by the group in Belgium.

In 1994, TEX plays as support act of ALVIN LEE, the famous guitarist of the band  'Ten years After' in

Le Havre (France) in the "Volcano".

"Voodoo Hours", a mini-cd as a tribute to Jimi Hendrix comes out in June 1995 with a personal version of the four titles of the master.

In 1996, TEX plays in the ‘Cirque Royal’ in Brussels as support act of the legendary American Group LYNYRD SKYNYRD.

The fifth CD titled "Ready" consists of 14 tracks of Marc produced by Jo Bogaert on Rowyna label and is released in November 1998.

In May 1999 TEX plays support act of SCORPIONS in Leuven, the second time for Marc

(at this time, Scorpions had become famous in the whole world).

During the following period, Marc feels saturated by all the years of music and concerts ...

His full-time job  in an industrial weighing company takes him considerable time and  leaves little time for anything else. He decides to ease off and TEX splits. Marc continues to play occasionally when organizers contact him for a concert or festival, under the name of Marc Librecht Band.

In 2012  TEX reforms for a while. The band goes to the studio again for a single mini 4 track CD consisting of new versions of pieces of TEX entitled 'Strike Back' and  released in March 2012.

They play during two evenings as support act for one of the greatest Dobro slide guitar player of the world, BOB BROZMAN, a chance for Marc to meet one of his favorite acoustic guitar heroes.

The group plays his last gig during the music festival 06/21/2014 at the 'Magic Mirror' located in the Parc du Cinquantenaire in Brussels, as part of a LIVE recording for the ‘CLASSIC 21 Blues’ show  of RADIO 21.

On 27th of september 2018 , the first acoustic CD of Marc has been released and contents 18 own compositions with 15 instrumentals and 3 songs. The name of the album is 'Legend of the Forest'.

This is the result of 45 years of composition on acoustic guitar, a kind of melting pot of all the musical influences of Marc.

Marc is now performing in a 'solo' electro-acoustic formula (guitar / vocals) , with a very eclectic and varied repertoire composed of own numbers and personalized versions of covers reflecting all his musical influences accumulated from the 1970's until today : Blues, rock, folk, picking, flamenco, jazz, reggae, french song, pop, etc ...

In january of 2019, Marc has started again his blues-rock trio 'Marc Librecht Band', actually with Dominique Burgho on drums and Pierre Varlez on bass...More news to come about this !

Many recordings of the musical work  of Marc can be found on Youtube by typing ‘Marc Librecht’,